WAS WILLIAM MORRIS RIGHT TO CALL BIBURY THE MOST BEAUTIFUL VILLAGE IN ENGLAND? 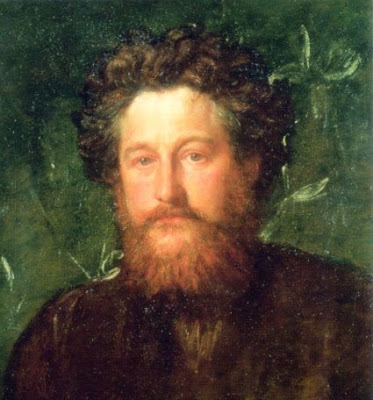 Well, according to the craftsman-artist William Morris (above) it is – or was, when he was around in the last half of the 19th century. At that time, of course, the village of Bibury was deep in rural England, and the road through it would have been just a muddy trail.

Today, Bibury is best known for the ridiculously handsome Arlington Row, a line of weavers' cottages that overlook the River Coln, a tributary that feeds into the River Thames at Lechlade, a small town a few miles away.

The River Colne is fast-flowing and quite shallow, so you can lean over and see wild trout swimming along. There's also a big trout farm at one end of the village that breeds some 10 million fish every year, though whether trout in the stream are escapees, I don't know. Wildlife in this area includes ducks, coots, moorhens and swans, so it's a fascinating place if you're interested in animals. When I was there, a rare black swan also put in an appearance, which added some pizazz to the visit.

My friend Lizzie turned up from her home in the Georgian town of Cheltenham for a walk along the riverbank, and we sat in the sunshine at The Swan Hotel afterwards, for a tasty (but not too hugely gross-out) tea of hot crumpets and scones, accompanied by melting butter and home-made raspberry jam.

If you're into fine country retreats, then another hotel is worth knowing about. The 18-bedroom Bibury Court Hotel is a dignified pile that dates from Tudor times, with landscaping in the grounds that includes a small waterfall and sweeping lawns.
Labels: bibury bibury court hotel bibury trout farm Cheltenham river coln river thames Swan Hotel Bibury the swan hotel Tudor william morris