Now that the trees are bare, the countryside has taken on something of the stark look of a Rowland Hilder painting. Not that we have snow in the south of England yet, even if the more doom-laden newspapers are already screaming that we can expect, "The Coldest Winter for 100 Years."


We'll just wait to see how winter really does progress, as the one predictable thing about the English weather is that it's unpredictable. However, the Hilder painting (header pic) was made in the Weald of Kent (note the pair of typical oast houses) an area that certainly sees its share of the white stuff. And the painting shows off Hilder's spare style and careful colour values well.

Rowland Frederick Hilder OBE (1905-1993) was an English artist who became well known in the 1950s and 1960s, particularly for his advertising work for Whitbread brewers. Large billboards showing romantic rural scenes decorated many roadsides, and when Strongs of Romsey were taken over by Whitbread, the hoardings entitled, “You’re in the Strong Country Now” seemed to be all across Hampshire.

I looked feverishly for those billboards when our family travelled south on vacation from Leicestershire every summer, not least because of the extra slice of Mum's home-made bacon-and-egg pie given to the first child to see one. A much more interesting challenge than plain old I-Spy!

Rowland Hilder first wanted to be a marine artist, but it was landscape art that made his name. In World War II he was commissioned as a Camouflage Officer in the Army, but worked hand in hand with the Ministry of Information, producing propaganda art like that shown below, from a poster depicting British and Russian soldiers fighting in common against the Nazi hordes. 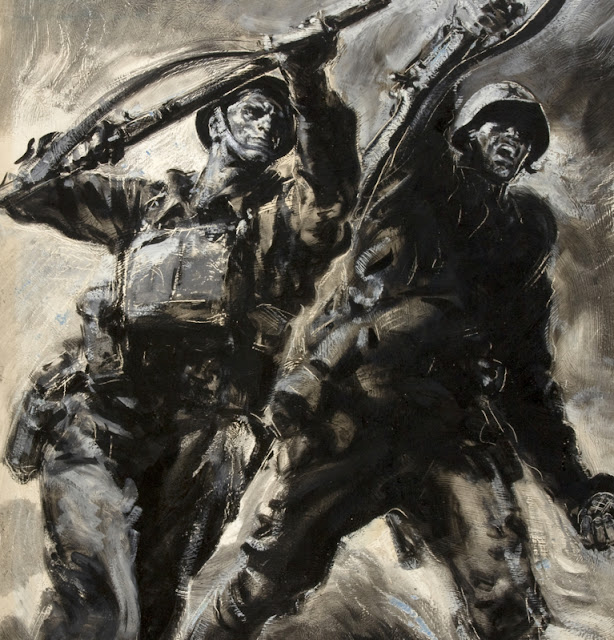 His post-war advertising works with Whitbread and for Shell were the opposite - idyllic scenes, with combat and conquest only memories, and none the worse for that, especially in a country still recovering from the deprivations of the war years.

The talent of this English painter - who really ought to be better known than he is today - is perhaps best described in his own words, “With a bit more time, I could get the hang of this.”

On a TEE note, we've been developing some linocut-style work recently with Hilder's work as inspiration, and hopefully developments of these initial experiments will be available to buy in an upcoming show. Here's a sampler of an early example. 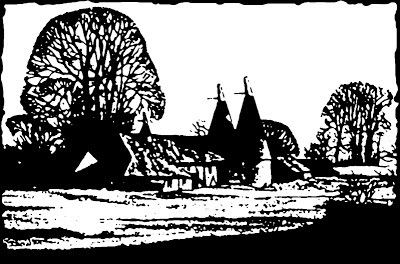