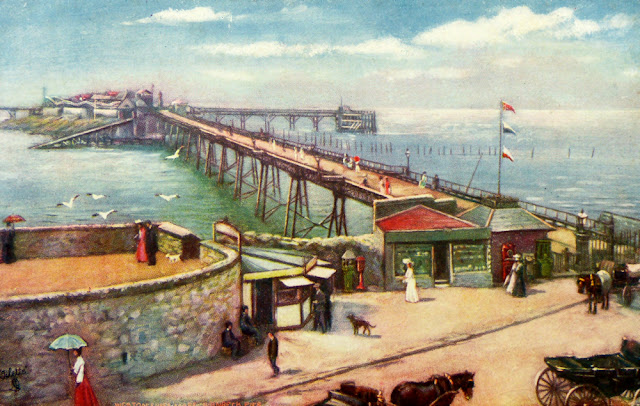 Browsing in an antique shop recently, I ran across this postcard showing Weston-super-Mare's Birnbeck Pier in the early 1900s. I never knew about this pier, the only one in England that links the mainland to an island, even if Birnbeck Island is just a rocky outcrop jutting above the waterline.


At the height of the late-Victorian seaside holiday boom, Birnbeck was not just a splendid pier, but also a steamer port, linking North Somerset with South Wales, directly across the Bristol Channel. 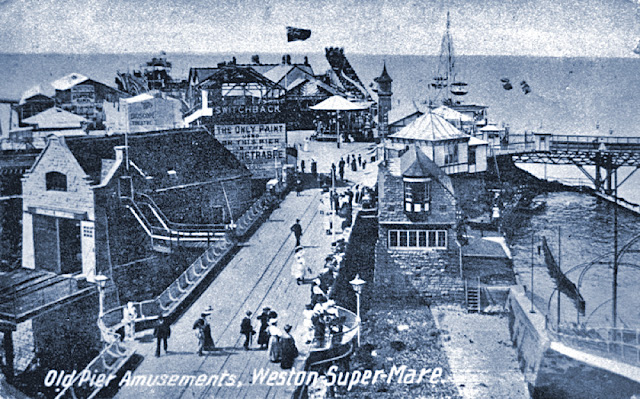 The pier was designed by Eugenius Birch, a noted naval architect and pier designer of the time, and opened in 1867, to much celebration by the townsfolk of Weston. It had a gothic tollhouse, with buildings at the pierhead the work of local architect Hans Price.

The new pier was a big success, and many day trippers from Wales never stepped foot on English soil, as there were plenty of attractions just a few steps away from the steamer - a funfair, cafe, pavilion, and other delights awaited them right there, at the end of the pier. Not that this state of affairs lasted very long - all those attractions went up in flames on Boxing Day, 1897, when the pier was just 30 years old.

The postcard below - the front is the colour painting at top - written in 1907, shows that the pier had been returned to working order, as “Grandma and I” used it to board a steamer for a cruise to Cardiff. They also planned to visit Clevedon, a small town just up the coast towards Bristol, with a pier that is still in fine condition today. 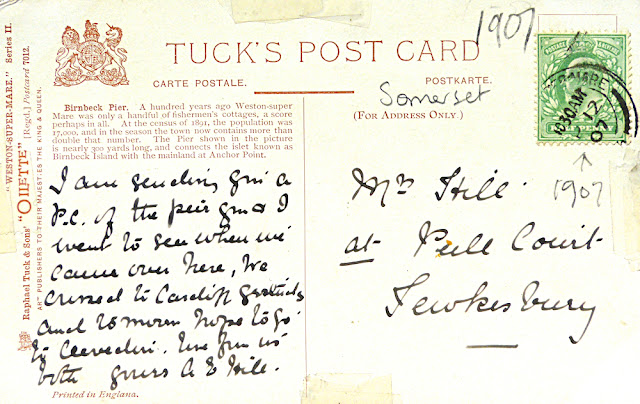 In the century-plus since the postcard was written, Birnbeck Pier has been extended, been used by the Admiralty, and most interestingly, was commissioned as HMS Birnbeck in World War II, when it was used for secret weapon tests in the Bristol Channel. These included trial runs by the famed ‘Dambusters’ 617 Squadron, when experimenting with the Barnes Wallis-designed bouncing bomb.

Birnbeck Pier is currently closed to the public, but if you're planning a hotel or bed-and-breakfast break in Weston-super-Mare, do take the trouble to walk along to have a look. And don't forget, Weston's Grand Pier is looking good and open for business.