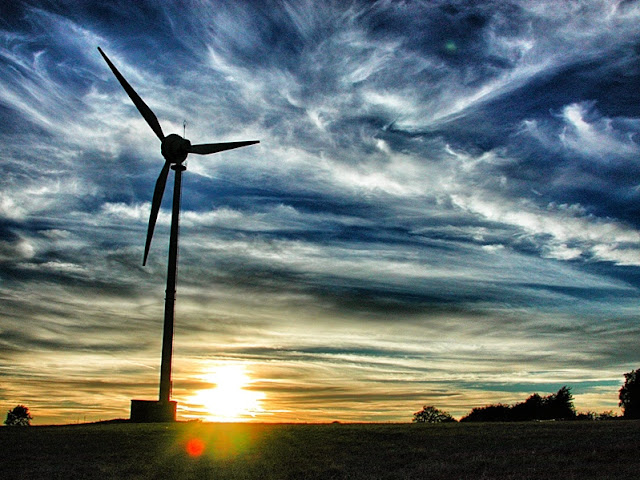 The subject of wind turbines seems to polarize opinion very quickly indeed - people tend to love them or hate them.


Readers of certain popular newspapers are often loudest among the haters, whereas myself and and others I know are more philosophical, as at least the energy that spins those blades comes 'free'.

Leaving aside arguments about possible dangers to birds and bats, the biggest difficulty is that wind turbines work best in high, exposed places, and that's where England's areas of outstanding natural beauty tend to be.

Having said that, in a future time turbines should not be too difficult to dispose of - one can be erected in just a few days, and dismantled in about the same time. At least we're not talking about radioactive waste, with a half-life of several thousand years.

In fact, I reckon a gleaming white turbine can look extremely handsome, and we do need power, after all. The turbine featured (above) is situated in a part of Gloucestershire called Lynch Knoll, having been there for more than 20 years, and was itself the subject of a five-year planning battle before being finally commissioned on 'Friday the 13th', December 1996.

There was no ill-luck in that commission date though, as since then the Lynch Knoll wind turbine has steadily generated enough power to keep more than 200 homes heated and lit. The turbine stands alone in a large field, mostly with just grass and cows for company. At other times, the adjacent field hosts dirt-bike racing round an off-road track - and at a good meet, a hundred or more cars may be parked nearby.

So there's plenty of action, dust and noise, while the turbine continues to swoosh around in the breeze. Which is worse: dirt racing or wind turbine? Or maybe both are OK in small doses.

In either case, the skies retain their beauty, and the turbine's shapely silhouette seems pleasing to the eye. Well, I think so, but I leave it to you to judge from this sunset photograph I took while there.