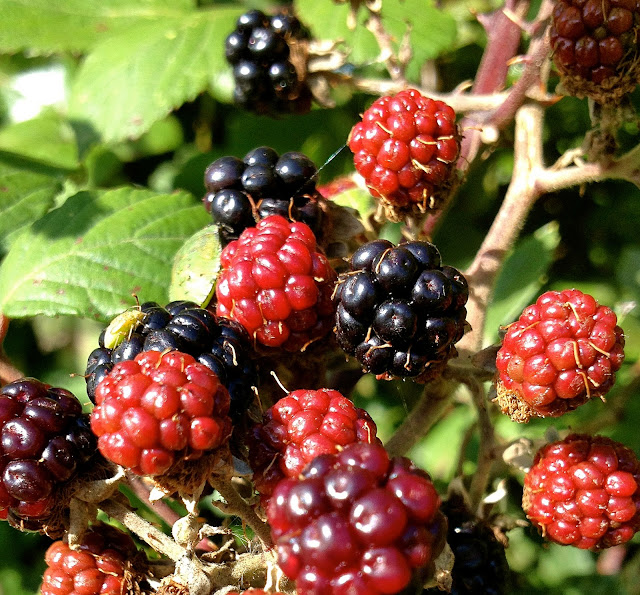 A beautiful Autumn day means it's time to raid the hedgerows for their berries. Now, this indifferent English summer has meant that 2012 has not been a bumper year for blackberries, though it’s been another story for elderberries, with my 'secret' hedge positively groaning with them

However, it’s blackberries that take my fancy today, so Chippy’s water tower field (below) was the target for a berry raid earlier. They are probably among the last of the crop, especially now we’re into times of chilly mornings. Once frosts start in earnest, the berries will be over.

What will I do with the blackberries? Well, there are plenty of recipes in books and online for jam, but most of them suggest too much sugar, so the finished product ends up over-sweet for my taste. As I found on my first jam-making session this year, a too slavish approach to following a recipe may end up with something that, whilst nice enough, may not quite hit the spot on the taste front.

We’re all different of course, both in how we appreciate foods, and in how our bodies react to them, which is why it’s important to regard a recipe as guidance rather than a straitjacket. 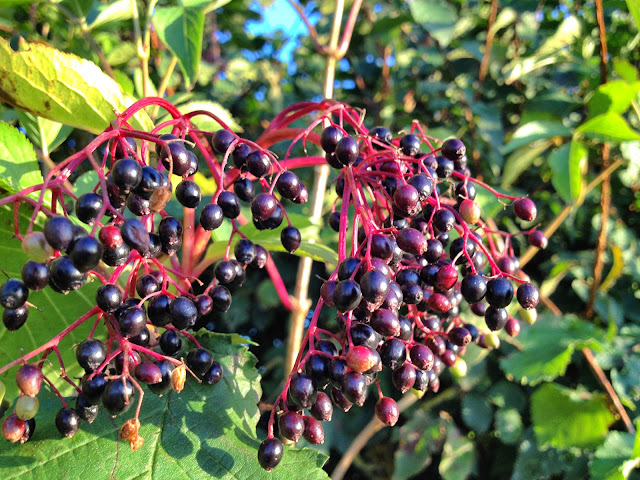 So far as the blackberries go, the early crop was mostly rather poor (not so elders, see pic above) with berries that tended to be small and not very sweet. Small berries take an age to pick too, so it’s a double-downer where satisfaction is concerned. However, it’s better late than never, now that we are in mid-October. Which leads me to the decision: should today’s blackberries be made into jam, jelly or compote?

I’m a great believer in groupthink, so after some deliberating here at TEE Towers, multiple tastebud desires gave the nod to a Blackberry and Apple Compote, so here’s my quick and easy recipe. It’s for a hand-picked 500 gr (1.1 lb) or so of berries. Adjust according to the quantity you pick. 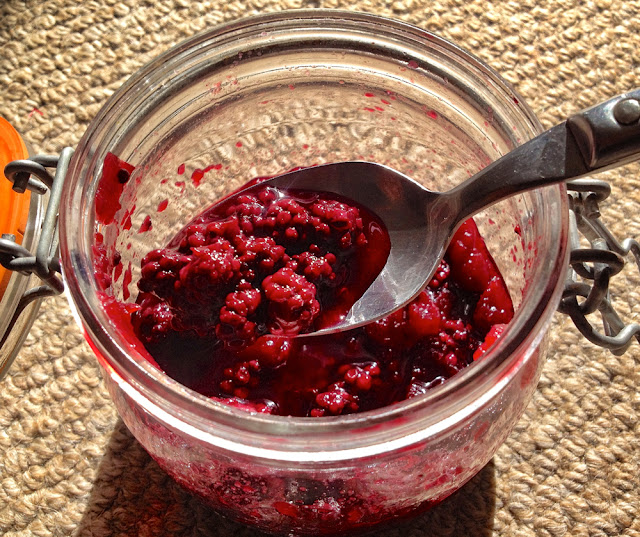 I use a wooden spoon to stir, Kilner jar to store.

1: Wash the berries through to remove any creepy-crawlies or other bits and pieces. Place in a saucepan with 1/3 cup of water. Bring to boil, cover and cook until soft - about 10 minutes.
2: Pour softened berries into a container, place on one side. Peel and cut Bramley apple into fingernail-sized cubes. Add 1/3 cup of water, 2-3 level dessertspoons of brown sugar.
3: Cook carefully. Don’t allow to burn, but do allow the sugar to caramelize a little, to add depth and flavour. Should take no more than 10-15 minutes until the sugar is browned and apple done. The apple cubes should be soft, but not mushy.
4: Add the blackberries to the apples (fold, don't dollop), together with half a glass of good red wine - Claret or Cote du Rhone is ideal.
5: Bring back to the boil for a few minutes, stirring gently to allow the flavours to blend and the alcohol to evaporate. Add some sugar if this is recipe is a little tart for you, then remove from heat and set to one side.
6: Prepare a container - I use standard Kilner jars - and scald well with boiling water. Pour the compote mixture into the jar, close and seal the top. Leave to cool thoroughly before storing in the fridge.