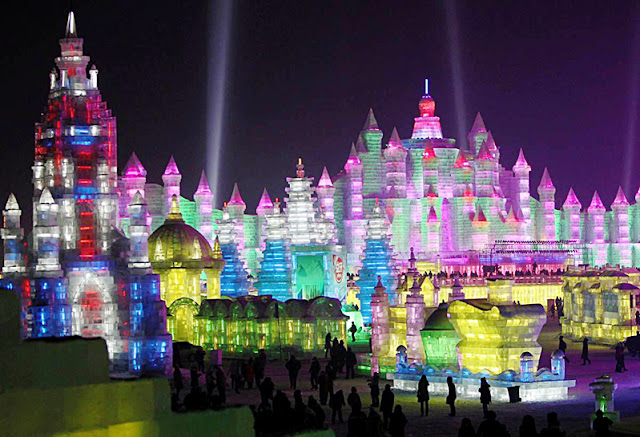 Four students from Nottingham Trent University in the Midlands leave England for China this week, to represent the UK in the 18th Harbin International Snow Sculpture Competition.

Harbin, a city in north-east China, hosts one of the world's four largest ice and snow festivals, matching the Sapporo Snow Festival in Japan, Canada's Quebec City Winter Carnival, and the Ski Festival in Norway. Ice for Harbin's amazing architectural fantasies is mined in industrial quantities from the local river with lighting supplied via LEDs. These are bright but cool, enabling the amazing colour visions you see here - and they can change colour too, lending a further dimension to the icy city-within-a-city. 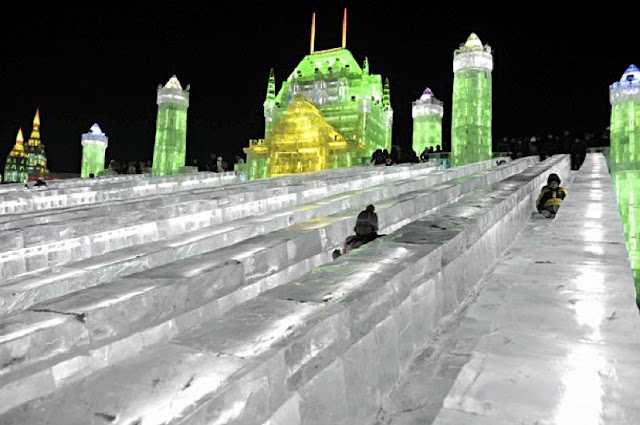 The four students - Emily Stapleton-Jefferis (my daughter), Lucy Woodhead, Sam Hewland, and Liman Metolli -  are studying fine and decorative arts, product design, and architectural technology, and they will head for the Harbin Engineering University, where they will be trained in snow sculpture techniques. The actual competition takes place in early January 2013, so they won't have time to hang about!

Leading the team is Peter Westland, Dean of the School of Architecture, Design and the Built Environment at Nottingham, who reckons the competition is, “a fantastic opportunity” that will, “enable them to experience a new culture, meet new people and learn new skills.”

They will also experience temperatures far below our experience in England of course. Their winter gear will have to protect them from sub-zero temperatures that can drop to a shiveringly chill -30° Celsius or even colder.

Nottingham Trent University has form in the competition, and this year’s students have a record to match in the biennial event, as the last team won the Universities section in 2011.