DAN DARE PILOT OF THE FUTURE 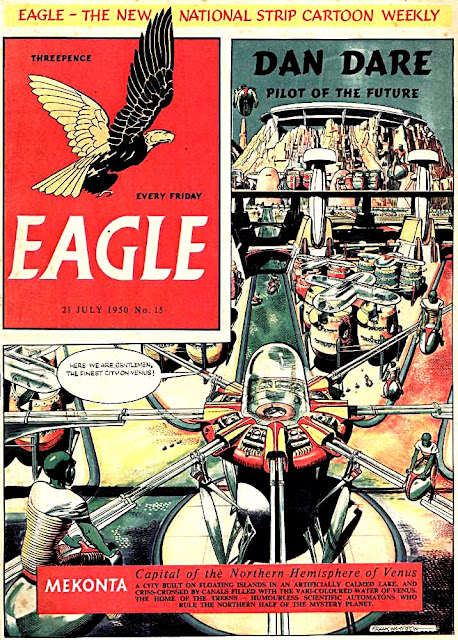 DAN DARE WAS THE SPACE STAR of the Eagle comic, a weekly publication launched on April 14, 1950, after which it quickly hit sales of nearly one million copies per issue.

The first adventure was based mostly on the planet Venus, a mysterious world that was thought to have a steamy, jungle environment. Today we know differently, as it has surface temperatures hotter than an oven at full blast. But with the knowledge of the time, Venus made an excellent backdrop for the Dan Dare mission: to find out if it could supply food for the Earth's peoples, many of whom depended on food blocks for survival. And of course, Dan had to uncover the fate of the spaceships that had disappeared before reaching Venus.

Venus itself was packed with the results of Frank Hampson's imagination and attention to detail. The header pic (above) shows his amazing vision of Mekonta, a high-tech megalopolis that was the home-base for reptilian Treens, and their evil overlord, the Mekon.

Back on Earth, the United Nations oversaw a largely peaceful world, and the Interplanet Space Fleet was based in Britain. The Hampson frame (below) shows Dan at left flying a Space Fleet helijet, with Space Fleet Controller Sir Hubert Guest. In the rear seat is Albert Fitzwilliam Digby, Spaceman First Class, and Dan's faithful batman.

Note the superb fictitious mechanical innards in the cutaway of the helijet - readers not only followed the story, but could salivate over detailed tech like the landing gear nose wheel, neatly folded away for flight. 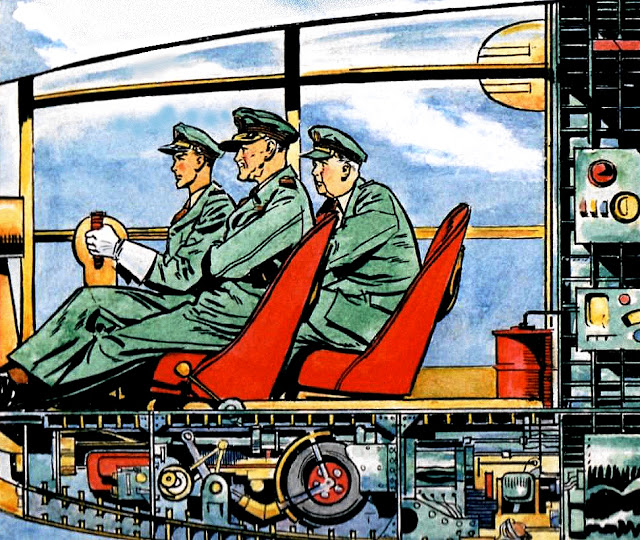 Later on, Dan got involved in extrasolar adventures (below) one of which featured the cruel denizens of the alien planet Phantos, who were busily enslaving the peace-loving natives of Cryptos. Note the dramatic cinema-style camera angles used by Hampson, showing him to be a true master of the frame-by-frame graphic story genre. 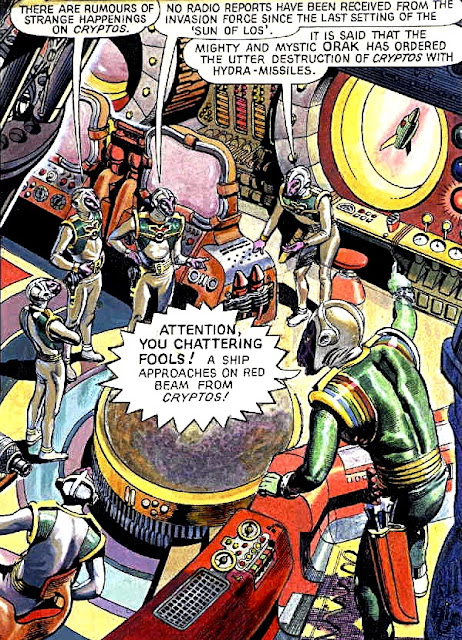 The video (below) gives a good account of the Dan Dare story, and is well worth watching.

The bust of Dan Dare (below, courtesy Peter Hodge) was donated by The Eagle Society. It can be seen in Southport, Lancashire, where the comic was first produced. 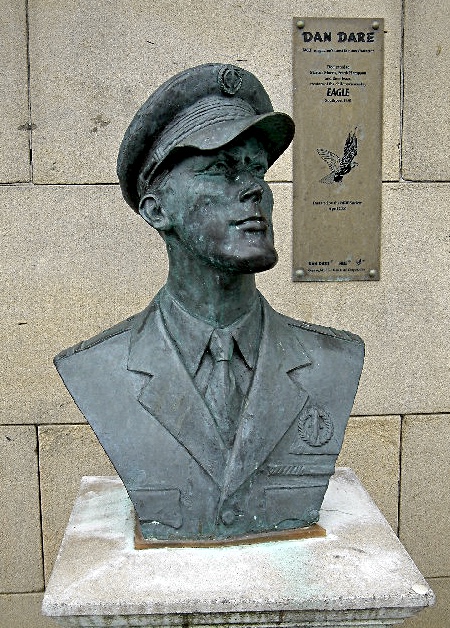