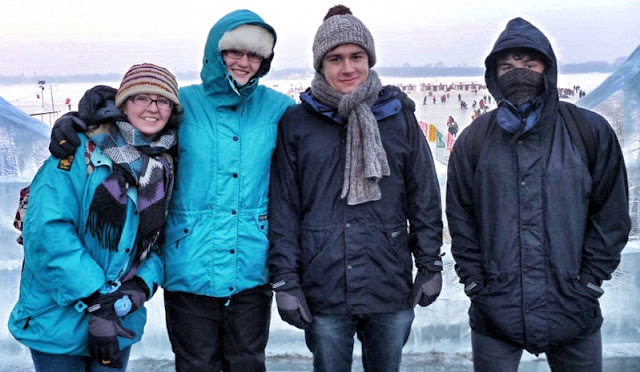 The student team from Nottingham University have hauled in a prize at Harbin, the city in northeast China, where one of the world’s biggest Ice and Snow Festivals is running.

In the team’s words, “WE WON!!!!!! Well.. the Creativity Prize anyway which is a cash prize of 1000 RMB (about £100), a medal each and a certificate each (and one for the Uni). We stood out as the most creative idea which is always nice to hear! The First place went to France, who we’d become good friends with.

“The closing ceremony was really good, if not a little chaotic to begin with. We genuinely thought we were going to get a commemorative prize, which is essentially a ‘thanks for taking part prize’ but when Yinguo (England) was called out for the creative prize we were really surprised!”

According to the team, transferring their original 2D plans to a 3D ice sculpture was not easy, especially in cold that had icicles forming in their eyelashes and hair. As I write this, the temperature in Harbin is ‘just’ -16C, with tonight's chill dropping to -31C and below.

Snow sculpture themes varied dramatically, depending on whether competitors came from East or West. Most Eastern teams went for classical themes, whereas Japan and the West were more contemporary - our team created a larger-than-life car crash, the Italians carved a piece of pasta, the French made a pure abstract, while the Japanese produced a water droplet.

Well done Nottingham team, and a special congratulation to my daughter Emily, shown at left in the team pic above.

In the team’s words, “...It felt truly rewarding to be bestowed with the creative prize, and to be applauded by what are masters in this art.”

More to read here or click on the link in the top bar.