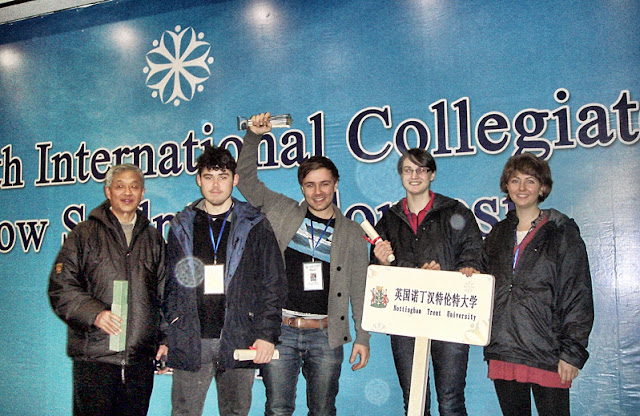 Our Nottingham ice-sculpting students have been hard at work in Harbin, northeast China, producing a hollow Earth Globe sculpture as their entry for a second competition at the 2013 Snow and Ice Festival.


In the team’s words, “We won! We really did this time, we came first in our second competition alongside six other first place sculptures.”

They go on, “It was hard work, as we ... got stuck straight in without a day’s rest. The temperature was much warmer at the University because it was far less exposed and there were lots more sculptures. The competition is the largest in the world with about 60 teams competing.”

As newbies in the world of ice sculpting, the team picked up skills fast during their first attempt, a larger-than-life car crash. And it shows in their words, “...we were happier with our sculpture this time round, which proves to show that practice makes perfect. It was also nice to feel we were back on home turf at the Harbin Engineering University which we now know so well.”

They’re getting to be publicity hounds too, with trophy presentations, and interviews for a Harbin newspaper.

There’s more to read, as well as a pic of the Earth Globe at the blog here or click the link on the top bar.