FANTASTIC NOISE AND SMOKE: TRUCK RACING AT THE FASTEST TRACK IN ENGLAND 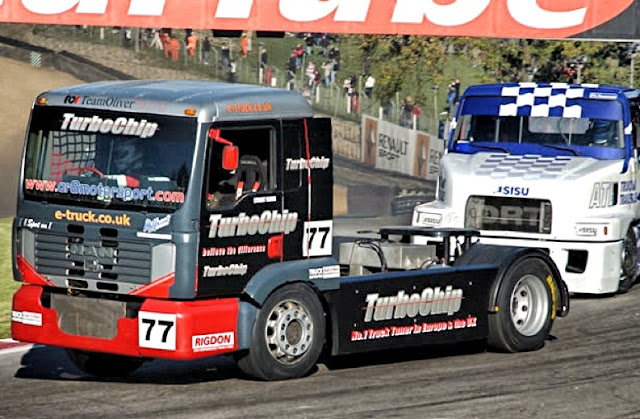 If you like motor sport, then keep the weekend of June 1-2 free, and head down to Thruxton in Hampshire, for a weekend of truck racing. The meeting is for one of the rounds in the Europe-wide truck-racing year, and makes for a great spectator sport.


The video (below) is one I shot a few seasons ago, and gives you an idea of what goes on in the pre-race marshalling area. Like many of the not-so-headline-grabbing kinds of motor racing, part of the appeal for visitors is that you can walk up close to watch vehicles being sorted for competition. It’s so unlike Formula One, where the last thing that's allowed is to go anywhere near the cars.


As for the foul-smelling fumes being pumped out, the swirling gases aren’t exactly an advert for eco-greenery, but they certainly added ‘atmosphere’ to the occasion. And boy, did I have to hold my breath!

Race trucks have a minimum weight limit 5.5 tonnes, races kicking off with a rolling start, the field being led for a lap around the circuit by a pace vehicle. Races themselves are fairly short, typically lasting just 8-12 laps, which makes for variety, with heats for different classes held during a day’s racing.

Unlike many other motor sports, race trucks look much like their road-going counterparts, and regulations stipulate that major components used must be the same. Racing is close and head-to-head, and minor collisions are fairly common, though I’m pleased to report that driver injuries are very rare indeed.